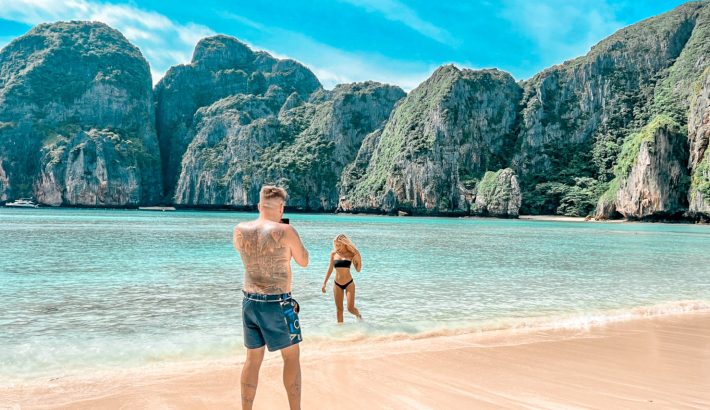 On the 1st of August, Maya Bay Phi Phi will close to give the Thailand National Park Authorities time to check and assess the last few month’s effects of tourists being allowed back on the beach.

Jay Leshark and his kids headed down to Maya Bay with Tour Guide Charlie from 5 Star Marine Phuket on the 31st of July 2022, to get the last walk on the sand before it closes for a few months.

Maya Bay, Phi Phi is one of the best and most beautiful beaches in Thailand IF not the world. The beach was featured in the movie “The Beach” with Leonardo DiCaprio which was filmed over 20 years ago.

Maya Bay Beach was closed for over 2 years by the Thai Government to help the ecosystem recover as it had become ruined by over-tourism. It reopened in January 2022 with new rules and regulations that helped to manage the tourists and how they access the bay.

Maya bay become worldwide known after the 2000 film “The Beach” which was an adventure drama film directed by Danny Boyle and based on the 1996 novel by Alex Garland.

There was some controversy during the making of the film, with the production team accused of landscaping some of the beach and removing some of the coconut trees to make it more like the descriptions in the book.

The bay reopened on 1st January 2022 with the new restrictions in place to manage the thousands of tourists that visit Maya Bay each year. Measures were put in place to protect the local ecosystems and these included, not allowing boats to close into the bay and drop anchor, but they now had to go around to the back of the bay and drop off guests at a newly built pier and stairs.

The numbers of guests visiting each day was also restricted as well as not allowing anyone to swim in the waters or even go too deep into the waters. These changes had made a difference, and when YouTube host Jay Leshark and Tour Guide Alex from 5 Star Marine Phuket, visited Maya Bay back in June, they saw baby reef sharks right next to the beach, you can see that video here:

Is the closing of Maya Bay a good thing? Very simply – YES it is!

If you still wish to visit Maya Bay then our tours do still head down to Phi Phi, and you can see the bay from a distance, and then head to visit the stunning Pileh Lagoon, or check out the monkeys on Monkey beach.

You can book these tours here: