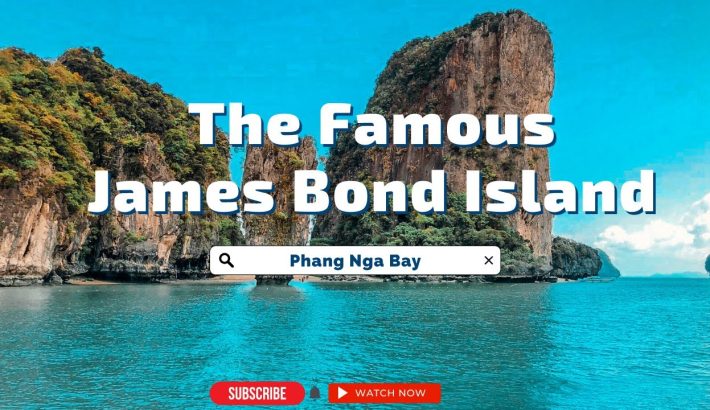 Phang Nga bay is a popular Private Phuket Boat Tour including the iconic James Bond Island. The 5 Star Marine Phuket boat tour into Phang Nga Bay from Phuket takes you into some awesome limestone caves and stunning hidden lagoons as well as kayaking up close to the limestone Kasts and visiting the amazing floating football pitch in Koh Panyi at Phang Nga Bay, Thailand, and of course going to James Bond Island, the island used in the James Bond movie “The Man with the Golden Gun”

Before you get to see the amazing James Bond Island, whose name in Thailand as Ko Ta Pu, (Also known Khao Ping Kan, BUT that is a different island, don’t worry I will explain all later), take your time to enjoy the spectacle that is Phang Nga Bay. This stunning bay offers you so much to see and do. The hundreds of caves alone could take you months to explore and that’s not to mention the stunning hidden lagoons and beaches or the stunning limestone Karsts that rise up from the emerald waters which you can explore up close by kayak. Phang Nga Bay is part of what was once a huge coral reef that covered much of what is now Southeast Asia.

James Bond Island is one of the must do’s when you are on holiday in Phuket, as I mentioned earlier it has many names. So, the island that most people take their selfies in front of is what is called Ko Ta Pu, translated into English, which means Nail Island. This was the island that in the James Bond Movie “The Man with the Golden Gun” was the backdrop when James Bond and Scaramanga had their duel. The island that your private boat will drop you off is called Khao Ping Kan, but both are more commonly known as James Bond Island.

If you are looking for a real epic day trip, checking out the awesome spectacular scenery that only Phang Nga Bay can offer then book up a Private Phang Nga Bay Boat Tour. You will not be disappointed.

Fun Fact:
Did you know that Ko Ta Pu, was also used in another James Bond film, Tomorrow Never Dies, BUT it was said to be in Vietnam.

YouTube host Jay Leshark and camera man, and awesome 5 Star Marine Phuket tour Guide Alex head out to spend a day exploring Phang Nga Bay. They float into caves, and find hidden lagoons, before kayaking and getting up close with the stunning limestone rock formations, and then they finally get that perfect Instagram picture at James Bond Island. Oh yes and Jay gets to check out the amazing floating football pitch at Koh Panyi. Must remember to take a football next time.